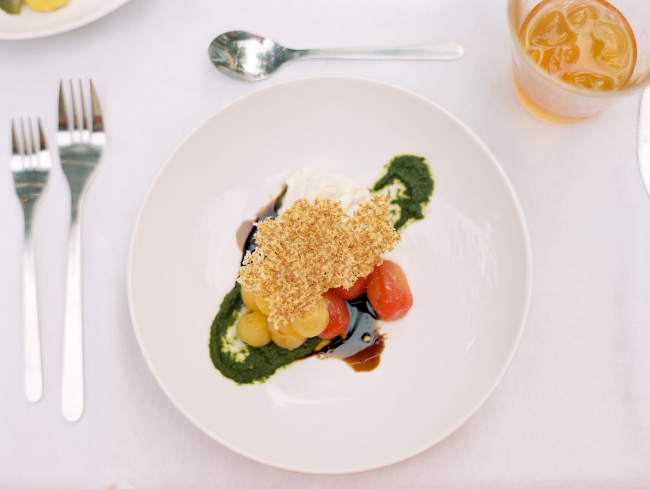 The old caprese salad is probably one of the most played out dishes in the universe. But there are ways to make yours exceptionally better than everybody else’s, and isn’t that what it’s all about? The key to success is finding the best tomatoes you can. In this case, I used tomatoes from my own garden, and it’s like I always say, “the best tomatoes around are the ones without skin”. If you’ve never peeled a tomato, let me tell you how to do it. Get a pot of boiling water going with a pinch of salt and put the tomatoes in for about 10 seconds. That time is not set in stone. Normally the riper the tomatoes, the faster the skin will come off, so if you’re using tomatoes from the store you might have to blanch them longer before the skin is loose enough to peel. Likewise, if the tomatoes are super ripe the skin is going to come off quickly; maybe even after three seconds of cooking. Either way, just put them in the water and check one after a few seconds to see if the skin comes off easily. If not, just put them back in for a couple more seconds. Let them cool on a sheet pan. In culinary school they will tell you to plunge them into ice water, but I haven’t worked at a place yet that has done this. If you stick a cooked tomato in ice water, all the good tomato flavor is just going to go away and it’s going to taste watery. 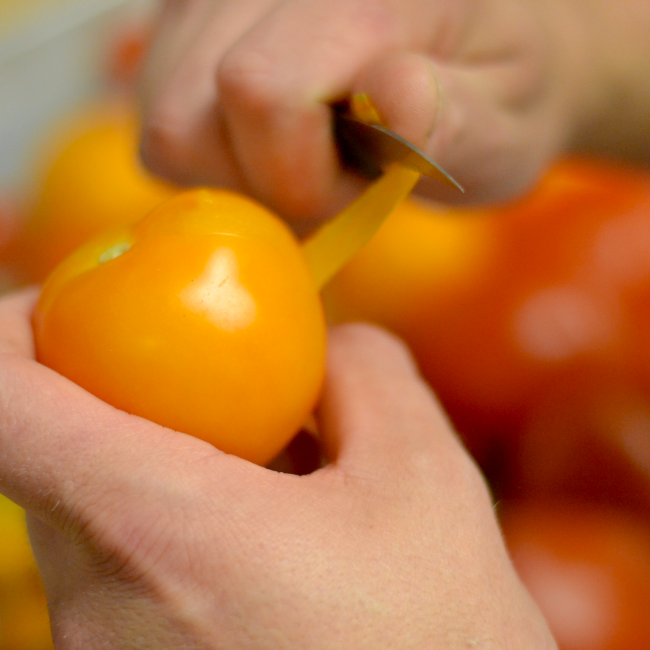 Another thing that’s going to make people happy is cheese. Everyone in their right mind likes cheese. And it just so happens that there is a great market nearby ( Caputos ) where they make their own buratta cheese by hand. It might cost you an arm and two legs but it is worth it. Basil is another crucial element in a caprese salad. In this case, I got a whole lot of basil, blanched it in boiling, salted water, and let it cool on a sheet pan in the refrigerator. When you blanch green vegetables, they also tell you to put them in ice water. But guess what? The same thing happens and they lose their flavor. You do want to cool the basil quickly though so stick it in the fridge. When it is nice and cold, pop it in a blender with a good amount of delicious olive oil and puree until it is super smooth.

Don’t forget the obligatory and ubiquitous balsamic reduction. If you have never made it before, don’t worry – it is super easy! I would start with 4 cups of a good balsamic vinegar, and put it in a wide pot at a medium-high heat. You don’t want flames to come up over the sides of the pot or the inside will burn. Reduce it just until it becomes syrupy. It will become even more syrupy when it cools off because of all the sugar in it. Most adults in their life have burned balsamic reduction because they’ve reduced it too much. The good news is when you’re done making it, if it isn’t quite thick enough you can always cook it more. But if you burn it, it just turns into garbage and that’s sad. If you’re not willing to take the risk, some higher end stores sell something called “balsamic glaze” which is pretty good, but not the real thing.

There is one more thing you need to make and that is a parmesan crisp. People have been making parmesan crisps since at least the mid-1800s, so the question is what can you do to make it a little bit different? What I did was fold a little bit of fine bran meal into the superfine shaved parmesan cheese before I baked it. With a microplane, grate parmesan cheese superfine – you need about 4 cups. Mix in one cup of fine bran meal (flaxseed meal might be pretty awesome too). Spread a nice even layer of the cheese and meal mixture onto a silicone baking sheet and bake it at 325° until it is golden brown and crispy. The bran meal adds a pretty sweet (as in awesome) nutty texture and flavor. 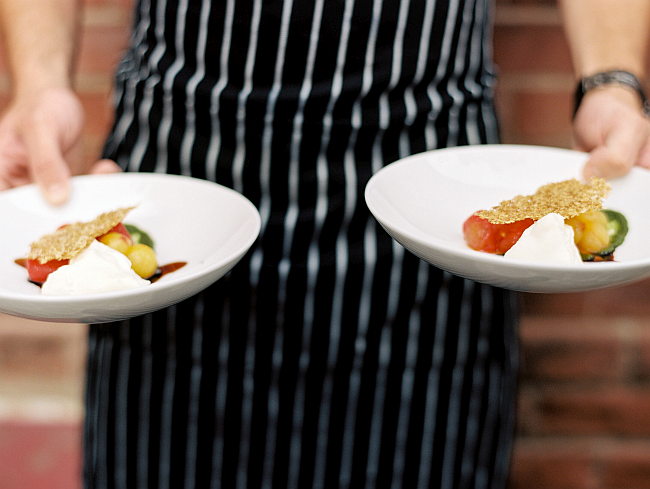 Now, to put everything together, smear some of the basil purée into the bottom of the plate, and add a few drops of the balsamic reduction around. Toss the tomatoes with a little bit of olive oil and a pinch of salt and then scatter them around the plate. Break off a big chunk of buratta cheese and season it with a little pinch of sea salt and a few drops of olive oil and place the big flake of the parmesan crisp on top.

I hope you successfully blow all your friends’ minds and look like a super chef in front of everybody!

Cheers to photographer  Rachel Thurston  for these great photos!